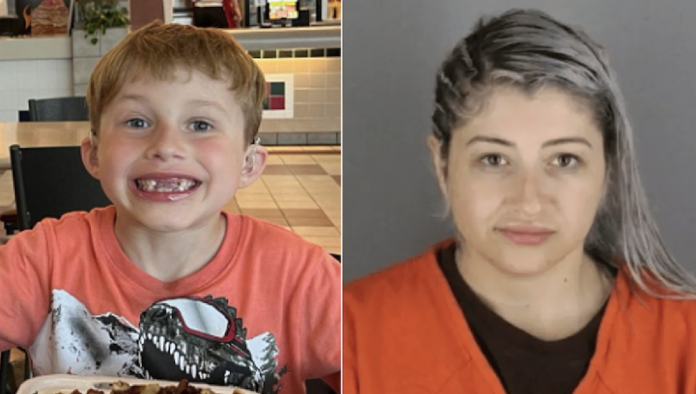 28-year-old Julissa Angelica Genrich Thaler of Spring Park, Minnesota was charged with second-degree murder; showing intent. She was accused of committing the murder of her 6-year-old son, Eli Hart. Thaler is scheduled for her first court appearance on Tuesday at 1:30 p.m. and her bail is currently set at $2 million. There have been reports of a man also being arrested in conjunction with Eli’s death. According to the Hennepin County Attorney’s Office, there is insufficient evidence as to the man’s involvement in Eli’s death.

Eli was a kindergarten student at Shirley Hills Primary School. His family has launched a GoFundMe Page to assist them with funeral costs.

The discovery of the murder came about on Friday, May 20 when officers conducted a traffic stop at Chevrolet Impala. The car was being driven by Eli’s mother, Thaler. The car was missing one of its front tires and was riding on the rim.

The car’s back window was also seemingly broken, Thaler also had blood on her hands. The charge report read that the vehicle also had a shotgun shell and a spent casing, blood, and what looked like a bullet hole in the back seat.

The police determined the vehicle unsafe to operate and decided to search it. This is when they found the dead body of 6-year-old Eli in the truck along with a shotgun as well.

Before the search of the vehicle, Thaler was allowed to leave. When the police discovered the little boy’s dead body, they immediately mobilized and went to Thaler’s apartment which they found empty.

Inside the apartment, the washing machine was running with the outfit Thaler had on when the police had stopped her in her vehicle.

Thaler was soon after arrested as she was fleeing the area on foot. She was found with what seemed like blood and brain matter in her hair.

A witness reported they had seen Thaler’s car at a gas station before she had been stopped by the police. Upon search of the gas station, police found a backpack covered in blood, fragments of bone, and what seemed like brain matter.

The police were able to track the ‘damage’ Thaler’s car had done to the road as she drove with just a rim and came across multiple locations where they found evidence discarded.

At one stop they found in a dumpster, a child booster seat covered in blood and with damage that was consistent with a gunshot blast.

One of Thaler’s friends had also provided testimony in the police’s statement, saying Thaler had asked to be taught how to use a gun and had gone to a gun range to be able to learn to do so. She had also bought a shotgun recently and had been carrying the gun in and out of her apartment, wrapped in a gray blanket.

The charges against Thaler stated that the police had found a significant amount of blood in the back seat of Thaler’s vehicle as well as evidence of brain matter. They had also found a gray blanket in her car.

A preliminary autopsy of 6-year-old Eli found that he had been shot up to possibly nine times in the head and torso.

Eli’s father, Tory Hart had been fighting to get custody of his son. Hart’s fiance Josie Josephson told FOX26 that Thaler struggled with drug addiction and mental health issues. Despite the couple’s repeated complaints and attempts to get custody of little Eli, his troubled mother was awarded full custody instead.

Before the final custody battle, Eli had been placed in foster care. His foster mother Nikita Kronberg told the media that “numerous people were saying they feared for Eli’s safety if he was returned to her, and that was ignored.”

A distraught Josephson said to the media, “That was it until last night when we got notified that he was found in the trunk of his mom’s car. Not only did we express concerns to multiple people, multiple times…every time the response was, ‘This is something for family courts.’ (CPS) said laws do not allow us to address this, unless (they) see physical abuse, (they) have no grounds to remove him from her home.”