Where was JT Daniels? The question should haunt Georgia 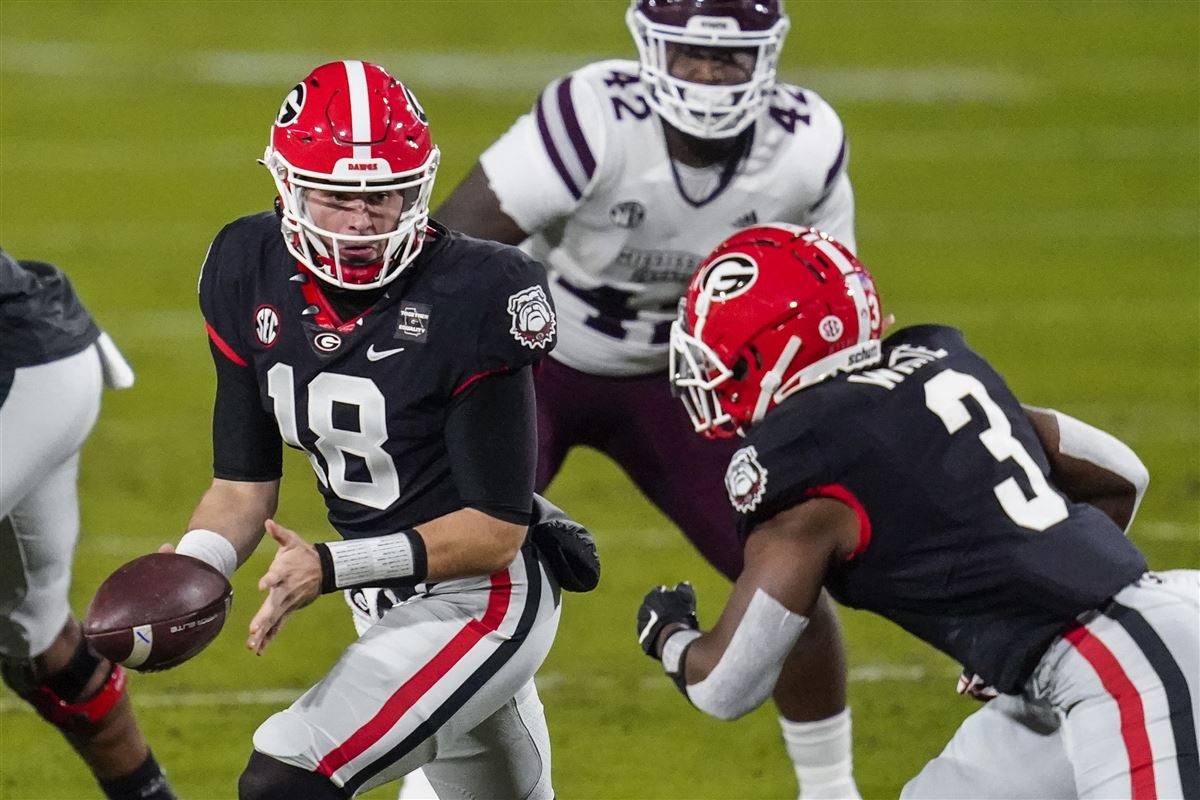 Six games, two losses and a good-bye wave to an SEC Championship — that’s what it took for Georgia coaches to be shoved into the JT Daniels era at quarterback.

The Southern Cal transfer, a former five-star recruit, didn’t disappoint in his debut, even if Georgia’s defense struggled and was picked apart for three-plus quarters in a 31-24 victory Saturday against Mississippi State.

Daniels wasn’t perfect, but he proved himself worthy of the preseason hype as the best quarterback on the roster. He was on target most of the night and threw a career-high four touchdowns against a respectable-if-shorthanded MSU defense. He also threw for 401 yards to go along with the four scores, the best combo by a Georgia quarterback since Aaron Murray threw for 300-plus and three scores in 2013 against South Carolina.

What took so long for the Daniels era to begin? Why the long wait?

I reported here several weeks ago that the story behind the story was complicated. Daniels, who suffered a torn anterior cruciate ligament in 2019, underwent a second procedure earlier this year. He needed more time than expected to recover, but he was cleared medically by team doctors following the Bulldogs’ victory in Week 1 at Arkansas.

“I wasn’t cleared for Arkansas,” Daniels told reporters Saturday. “From then on, it was a coach’s decision.”

So, we waited and so did Daniels. He worked with the scout team as former walk-on Stetson Bennett filled in admirably as the starter. Bennett, however, is obviously not an elite passer. Deep pass after deep pass fell short or sailed too far. The Bulldogs had it all figured out heading into the Alabama game, it seemed, except for the success down the field that teams must have to be elite (Clemson, Alabama, Florida, etc.). It was clear, at least in this corner, a bold move needed to be taken after the 41-24 loss at Alabama, where Georgia’s biggest failure was the inability to stretch the field.

Finally, during a bye week, Daniels’ snaps increased. He finally received a few reps with the first-team offense, sources told me at the time, but coaches were still more confident in Bennett and freshman D’Wan Mathis. Then came the Florida game. The Bulldogs were abused. Bennett was injured. Mathis was inconsistent. Daniels warmed up along the sidelines but did not play. Georgia lost 44-28, all but dashing the Bulldogs’ playoff hopes. Florida now controls its own SEC and playoff destiny.

The loss provided an avalanche of what-if questions. Georgia’s defense held Florida to six points in the second half. The Bulldogs, however, managed only one touchdown in the third quarter. Bennett and Mathis combined for three interceptions and two touchdowns while barely eclipsing 100 total yards and nine pass completions combined.

It was clear in the third quarter the Bulldogs needed to make a change. At this point it wasn’t so much a bold move, but seemingly a necessity. Still, Georgia coach Kirby Smart opted with Mathis’ familiarity with the playbook over pure talent. It may have cost Georgia a double-digit comeback and a rematch against Alabama in the SEC Championship.

The decision will be the story of Georgia’s season. Bennett and Mathis combined to complete only 41.8 percent of their passes for 243 yards in two games before Daniels was elevated to starter.

It must have been frustrating for Georgia fans Saturday as they watched Daniels slice up an SEC defense for the first time in 2020. Might Daniels have done the same against a Florida defense that previously gave up 41 points to Texas A&M earlier this season, and trailed winless Vanderbilt Saturday? Could Daniels have hit just one of those big misses against Alabama?

We’ll never know. We also don’t know why Smart opted to stick with Bennett and Mathis for what seemed like three games too long. Despite Daniels’ success Saturday, it was obvious he did not quite have the freedom of other quarterbacks on the roster to check out of plays and make on-field adjustments.

Was there more to Daniels’ rehabilitation from knee surgery? Did they believe Daniels was further behind with the playbook?

If it’s the latter, Smart has plenty of explaining to do. Daniels is obviously more talented, and not molding the playbook around your best player is a failure by the staff. Players win games, coaches lose them and Georgia has lost one too many games.

Smart has dealt with too much quarterback drama since his arrival in Athens. He may never shake off the loss of Justin Fields to Ohio State. If he fails to win another SEC title, that may be his legacy.

Smart faced a difficult question when Wake Forest transfer Jamie Newman opted out of the season after two weeks of preseason practices. Daniels wasn’t ready at that point — and he reportedly wasn’t cleared medically — but what ensued in October was a cloak-and-dagger approach by Smart that led to the Bulldogs’ slow march out of the championship race.

Smart had a championship-caliber defense, two potential breakout receivers in Kearis Jackson and George Pickens. He just needed an elite quarterback to push the football, stretch defenses and change the identity of the offense.