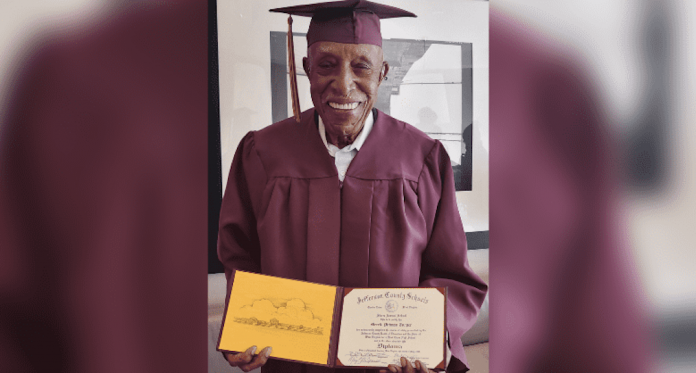 It’s never too late to achieve your dreams and Merrill Pittman Cooper is proving it after completing his high school diploma at 101. Cooper waited for over 80 years to finally get his hands on the certification but never once did he give up on his dream.

According to a statement from Jefferson County Schools, the elderly man attended Storer College in Harpers Ferry, West Virginia, from 1934 to 1938. At this college, Cooper studied mathematics, Latin, history, English, and biology. However, he had to drop out of his senior year after his single mother could no longer pay for his high school tuition and thus relocated to Philadelphia along with the family.

“She worked so hard, and it all became so difficult that I just decided it would be best to give up continuing at the school,” Cooper told The Washington Post. Now Storer College was established in 1865 for the newly freed slaves in the light of the Civil War, per the US National Park Service. It was one of the only educational resources for Black people who lived in West Virginia. After serving more than 7,000 students, it shut down in the mid-1950s.

In 2018, Cooper revisited the school after enjoying a long and prosperous career in the transportation industry. He was one of the first Black trolley car drivers in Philadelphia, according to KIRO7 who was also a union leader. While visiting the school, which is now part of Harpers Ferry National Historical Park, he told his family about his regret of not being able to earn a diploma, the only gap in his otherwise successful life.

In a bid to help him, his family reached out to the park staff. Working together with the local, regional, and state partners, they honored the centenarian with a diploma and ceremony on March 19. According to CNN, the Storer College National Alumni Association, Jefferson County Schools, the West Virginia Department of Education, and the Harpers Ferry National Historical Park were all involved in his beautiful gesture.

“Jefferson County Schools is committed to helping every student, young or old, fulfill their dreams. For Mr. Cooper, that meant receiving a high school diploma. We are honored to help make that dream a reality,” shared the school system’s superintendent Bondy Shay Gibson-Learn. The Jefferson County Schools also shared pictures in a Facebook post, celebrating the occasion.

“JCS was proud to be part of a collaborative effort to honor 101-year-old Storer College attendee Merrill Pittman Cooper with an honorary high school diploma. The recognition took place during a special graduation ceremony on March 19 with Mr. Cooper’s extended family in attendance,” it read.