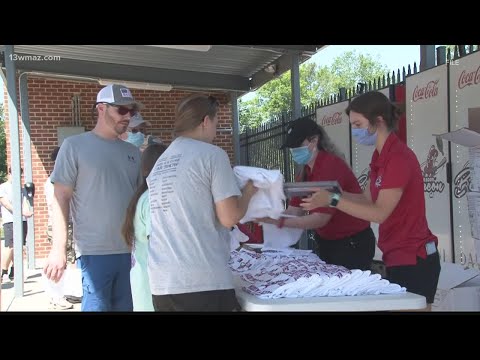 There’s baseball to be played and bacon to be eaten at Luther Williams Field. It’s time for the start of the Macon Bacon season.

In April, team leaders announced they would delay the season because of COVID-19.

Their first game is this Thursday, but with some new changes. This is what you need to before this season.

Starting at the entrance, there will be signs telling everyone to social distance, and scanning your tickets will be touchless.

Once you get in the stadium, you may notice there are fewer Macon Bacon fans. Usually, the stadium holds about 3,300 people, but because of COVID-19, they’ve had to reduce capacity by 63 percent.

“If a family comes and it’s mom, dad, son, and daughter, the next closest people will be at least three seats away every other row,” said Brandon Raphael, the team’s president, explaining the setup.

Raphael says they’ll rely on self-policing and their ushers to monitor if people are social distancing in the stands.

Once you’ve been at the game a while, you’ll probably want a cold drink and some popcorn, but expect some changes there, too.

At each concession stand, they’re eliminating one line and adding a pick up line to reduce contact between fans and staff. They’re also going cashless at majority of windows.

For fans who only have cash on them, you can put the cash onto a gift card in the gift shop, Raphael said.

As for masks, fans are strongly encouraged to wear them. However, all game day staff will be required to.

“Number one priority for us is for our fans, our players, our coaches, and our staff to feel safe to come to the ballpark, because we are the Macon Bacon and we’re going to have lots of fun,” Raphael said. “We are going to entertain you, but most importantly, we want you to come out and do it in a safe manner.”

In addition, Raphael says that if a ticket holder has a fever or is sick, Macon Bacon will allow them to switch the ticket for a game at a later date. Once the game is over, Raphael says fans will be asked to exit at the closest location where they’re sitting to hopefully reduce the amount of people congregating in the stadium.