Trophy hunter poses with the heart of elderly giraffe she shot dead, a Valentine’s Day present from her husband 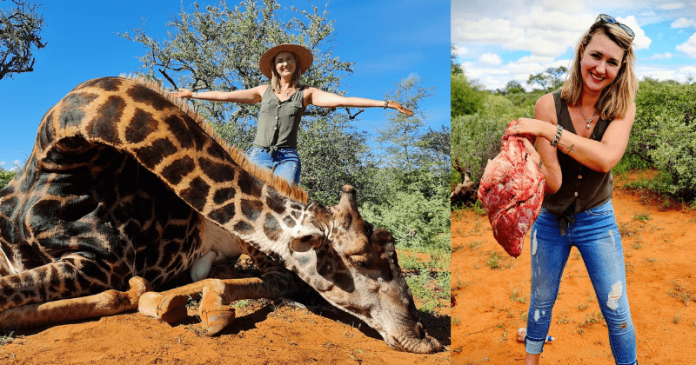 This woman began hunting at the age of five, and has grown up with the “pride” of murdered lions, leopards, and elephants as a hunting sport. But for the past half a decade, the woman has been on the lookout for an old giraffe to add to the list of roughly 500 animals that she has shot over the years. And now, after a long wait, the hunter got what she had waited for just in time for Valentine’s Day.

This year, the trophy hunter and her husband had planned a trip to a resort for their Valentine’s Day celebrations in South Africa. But the moment she was told about an old giraffe, she gladly changed her plans and praised her husband helping her five-year-dream come true for about $2,100.

“My husband booked a trip for us to the palace of the lost city situated in Sun City for our Valentine’s weekend, but our plans changed quickly,” Merelize wrote on Facebook. “My wonderful husband knew this was my dream and fully supported me from a romantic 5-star weekend away to roughing it again in the heat and bush. I was literally like a little child for 2 weeks and counted down the days.”

The boastful trophy hunter later posted a video on Facebook, showing the moment she gunned down the giraffe and called it the “perfect frontal neck shot.”

Proudly posting pictures of the animal on the ground, Merelize also uploaded pictures of her holding the giraffe’s heart in her hands and wrote on social media, “I’m absolutely over the moon with my BIG valentines present.”

Planning to use the giraffe’s skin as a rug, the trophy hunter said, “I’d waited years for my own perfect bull – the older a bull gets the darker he gets. I love the skin and the fact it’s such an iconic animal for Africa.”

Although Merelize received massive outrage after putting up pictures from the hunt, she continued being defiant about her actions and claimed that trophy hunters were the ones bearing the responsibility of wildlife conservation. She taunted animal rights supporters and said, “I have no respect for them – I call them the mafia.”

By claiming that killing an old bull would mean “a new bull can take over and provide new strong genetics for the herd,” the belligerent trophy hunter went on to say, “If hunting is banned, animals will become worthless and will disappear. Hunting has helped bring back a lot of species from the brink of extinction. The only people protecting these animals are trophy hunters.”

Justifying her kill, she claimed that her hunt “created work for 11 people that day” and provided “a lot of meat for the locals.”

However, others refuted her claims of trophy hunters helping animals, including Dr. Mark Jones of the Born Free Foundation who said, “Trophy hunters’ claims they are concerned about wildlife conservation are highly misleading. Trophy hunting is not a conservation tool, nor does it contribute significant funds to local communities.”