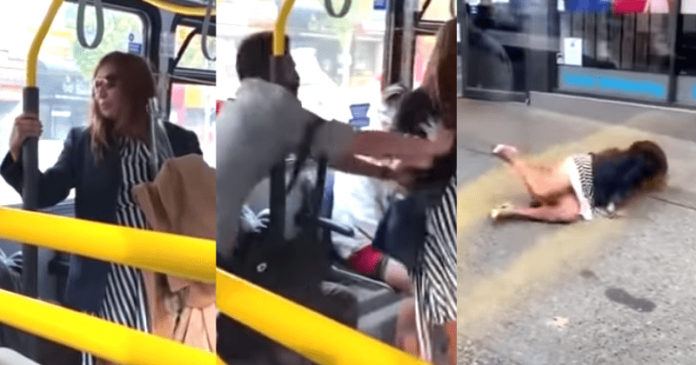 Travelers inside a bus witnessed a shocking moment where a woman was pushed off the bus after a scuffle with a fellow passenger. After the video went viral, the incident came to the attention of Transit Police, who have asked witnesses on the bus to come forward with any information they might have. The incident was captured on video and posted to the social media website called TikTok but was later deleted after the clip, which lasts for less than 30 seconds, was widely shared, reaching the nooks and crannies of the internet.

Appearing to start in the middle of a quarrel, the video begins focusing on a woman, standing in the middle of a bus without wearing a mask. In the background, somebody can be heard saying the word, “disgusting,” after which the woman turned to a man sitting in the bus with a mask and spat right at him. Immediately, the man got off his seat and aggressively shoved the woman towards the door. A second push later, the woman was out of the bus and on the ground, after which another woman can be heard saying, “Oh my god, what’s wrong with you?”

A fellow passenger went to help the mask-less woman while the enraged man said, “She spit on me,” as he wiped the saliva off his forehead.

The video was also acknowledged by TransLink, which runs the city’s public transport services, and they were quoted saying, “The safety of our customers is our #1 priority. Thank you to everyone for their concern. Transit Police are currently investigating this matter.”

There is still no clarity on what led to the tussle in the bus and whether it had anything to do with the fact that the woman was not wearing a mask.

Previously, it was announced by TransLink that commuters would have to wear a mask while using public transport. However, in the event of someone not wearing a mask, the police told people that it was not wise for individuals to take matters into their own hands. “If there is somebody on transit who is not wearing a mask, we encourage people to socially distance themselves from that person,” Sgt. Clint Hampton added. “We don’t want people trying to police the mandatory mask policy and putting themselves at risk.”

If found, the woman could face charges as spitting on someone counts as an assault in Canada. Hoping to identify the woman and find out what spurred the incident, Sgt. Hampton added, “It’s disgusting. No other way to put it, for people to be spat on is disgusting for people.”

Sgt. Clint Hampton from the police department said: “It’s gone over to our external investigation unit, they are attempting to reach out to the individual who had posted the video in an effort to gather additional information.”

Since the video was later deleted and considering how challenging it is to get in touch with someone through TikTok, the officer went on to say, “This makes the investigation difficult, we are working off of a video with very limited information. We know when the video was posted but we don’t know when it was taken. Was this taken yesterday or was it taken three months ago? We are asking if anybody was a witness to this even or was involved in this event to please contact transit police.”