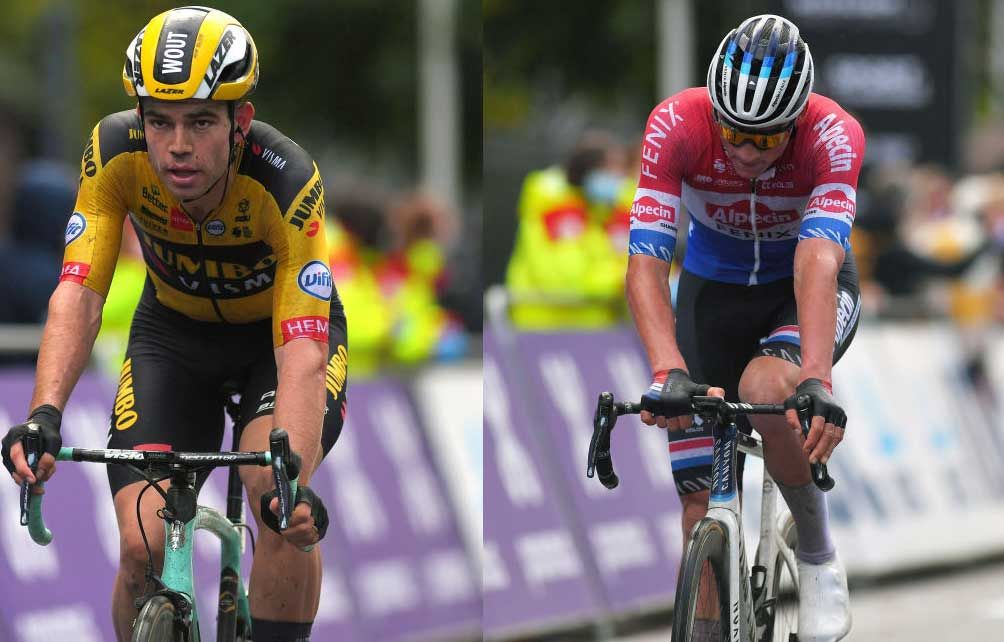 Wout van Aert (Jumbo-Visma) has been training hard in Girona, Spain, as he prepares for his cyclo-cross season and a renewed battle with lifelong rival Mathieu van der Poel (Alpecin-Fenix).

The two clashed at Gent-Wevelgem with Van Aert accusing his rival of riding to make him lose, then again at the Tour of Flanders, with Van der Poel winning the sprint by inches. However, Van Aert arguably had the better 2020 road race season, winning Strade Bianche, Milan-San Remo, two stages at the Tour de France and two silver medals in the World Championships road race and time trial. They will soon clash again in cyclo-cross races, where both are former world champions and where their rivalry started as schoolboys.

Van der Poel recently spent a week in Dubai, laying the foundations for his return to cyclo-cross in mid-December, while Van Aert will return next weekend in Belgium and then the Tabor World Cup. The two are due to clash for the first time on December 23 at the X2O Trophy round in Herentals before going on to fight in other races and especially the cyclocross World Championships in Oostende, Belgium.

Despite an intense 2020 season, made harder by the COVID-19 coronavirus pandemic, Van Aert seems ready for a return to cyclo-cross and for a return to his intense, headline-making rivalry with Van der Poel.

“I’m definitely looking forward to taking on Mathieu in the mud,” Van Aert said in an interview with personal sponsor Red Bull, happy to fan the flames of his rivalry.

“I don’t think it is any easier for me in cyclo-cross, everyone also knows Mathieu’s ability on the bike. Even if I have very good legs, it’s still difficult to get close to him, but that doesn’t mean that I’ll give up trying. I haven’t been able to show myself in cyclo-cross very much in recent years due to injuries or just a lesser form but I still want to get back at my best. This year I’ve come out of the road season very well and there is really nothing to indicate that it would go less in the field. I hope to get back to my old level and be at my best in January, especially at the World Championships, so I can compete again with Mathieu and the other riders.”

Het Nieuwsblad spied on Van Aert’s Strava training data, noticing he clocked up 511km and almost 8,000 metres of climbing during five different rides on and off roads last week in Spain. He also ran for 12 and then six kilometres.

“The focus is now mainly on my explosiveness because that is blunted when you ride the Classics on the road,” he explained.

“We try to do some efforts for that because we really need the power in cyclo-cross. You really have to sprint after every corner and it’s much less of an endurance effort than on the road. That work can be done with specific training on the dirt but in Spain, we did intervals of a minute or half a minute on the road.”

Van Aert played down his chances and form for his early races but is keen to get back racing.

“I have prepared very briefly for the cyclo-cross season for the time being. I made the choice to return to races as soon as possible because that seemed to be the most important for January. I certainly won’t be in my best condition.

“I’m going to ride three cyclo-cross races and then I train for a period to hopefully be at my best from the Christmas period. I’m going to need some serious improvements to be able to compete with the cross specialist guys, the level is high.”

“Of course Mathieu is always one of the most important competitors. He has been the benchmark in cyclo-cross for years and that won’t change. The difference with the rest will be smaller, that was also the case last year. Eli Iserbyt and Toon Aerts also seem to me to be great rivals.”

Van Aert will again switch to road racing after his cyclo-cross season, lengthening his training rides to prepare for the spring Classics, while trying to hold onto his strength and explosivity in the hope it gives him an edge.

He does not seem bothered by the extra racing, training and expectation needed to compete in both cyclo-cross and road racing.

“Sometimes I do wonder what I’m doing to myself by having such a busy schedule. But other riders have their next goal in February or in the spring but I really couldn’t wait long,” he admitted.

“Going from one goal to another keeps me on my toes. I also have a lot of smart people behind me, with my coach leading the way and always making sure that it is physiologically feasible. I have short periods of rest at different times in the season and that works well to combine everything.

“The important thing is that you believe in yourself. If you think in advance that it’s not possible, then it won’t work out.”

Looking back at the success of 2020

Looking back to his hugely successful 2020 road race season, Van Aert admits his Tour of Flanders defeat by Van der Poel still hurts, while he is understandably proud of his Tour de France performance. He was able to fight with the sprinters for stage victories and work hard for Jumbo-Visma team leader Primoz Roglic in the mountains. He has quickly been considered a future green points jersey contender or even a Grand Tour rider.

“I was satisfied with my ride at the Tour of Flanders even if it didn’t go perfectly. I crashed – that cost me – but I did a nice final and was almost there, except a few centimetres,” he said.

“It was my last race (of the season) and so for several days, I was constantly thinking about what I could have done differently or why it just didn’t work out. It took some effort to process that disappointment.

“It was difficult for the winner in me to just miss out on victory at both the World Championships and the Tour of Flanders after the Tour.

The Tour de France was full of happier memories and one huge disappointment when he witnessed Tadej Pogacar snatch the overall victory from Roglic.

“I think the Tour was a real highlight for everyone this year. It was already the most important race anyway and in this Coronavirus year, it was very important for our sport to continue,” Van Aert pointed out.

“We had a lot of ambition to win the Tour de France and we almost succeeded. It was fantastic that I was able to win two stages in the first week.

“Personally I’m actually most proud of the last mountain stage where I finished third. I finished with the overall contenders; I never dreamed that it would be within my reach, so I’m very proud of that.”

“The final time trial was also very special. That sudden turnaround was not a nice moment for us but I will never forget that I was there. I saw Pogačar win and then saw Primož collapse. It wasn’t fun to be in the losing camp but sports history was being made in front of me.”